Saturday, 16.11.2013 – the sports hall of the Clara-Schumann-High school is filling up with about 60 participants around 15:00 for the end-of-the-year-seminar of the Jiu-Jitsu Union NW. The special thing about this year: three different experts on three different disciplines teach at the same time – Jiu-jitsu, Escrima and classic boxing. 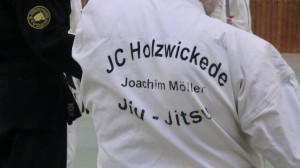 In the foreplanning to the seminar, the organizers thought about how to ‚expose the athletes to sometimes different, strange patterns of movement‘, since Jiu-Jitsu is being trained all year-round in the respective clubs. The promotion of this seminar concept had even the effect, that martial artist from non-affiliated clubs attended!

At 15:00, the organizers welcomed all those present and the respective experts and their teams were introduced. Then, all participants were divided into three groups, which were supposed to switch to the next group after one hour. The dividion was based on graduation, so that the groups were relatively homogeneous. 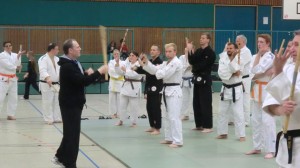 (Sifu/Master) Marcus Schüssler took over the first group and welcomed each person individually. The session started with simple coordinative exercises and being followed up by a joint analyzing of the importance of this ’stick juggling‘ in regards to self-defense and effectiveness. Subsequently after a further short logical analysis, that the stick or the weapon in general can only have a strategic benefit through the human action, the group started directly with the practice of controlled hitting. Factors such as speed, distance, control, balance, etc. were set into a new context by the participants themselves 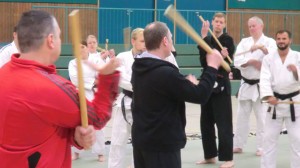 The exercises began only with the power generation of the arm, then in connection with stepping forward and continued with the hip. The participants understood the universal importance of impact and multiple hitting, and which effort each participant has to make in order to realize this! 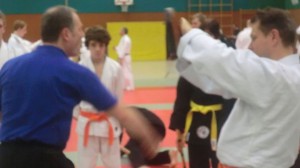 Applied partner exercises for stability and balance testing completed the picture and everyone really became clear, that the stability of the previous movement is automatically associated with stability at the end of a movement.
This general outline of teaching was done with all other groups in the same manner. At the end of each round, all participants received the same problem constellation – everybody was supposed to imagine facing their self, and that their self had exactly those capabilities, which they have learned and trained through the logic of strategy and body on this day.
The homework for all participants was to think about a solution if firstly their self would be constantly attacking them with strategy, like they had practiced, and secondly how to take away the weapon of such an attacker. 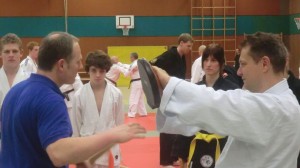 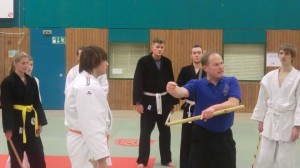 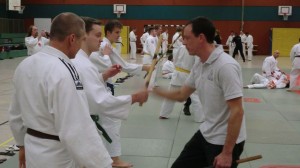 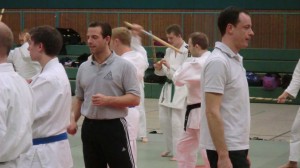 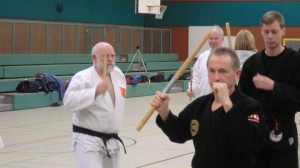