IUEWT Wing Tsun stands for a systematic which exceeds the practical application of martial arts by far. IUEWT Wing Tsun (like IUEWT Escrima as well – the counterpart from the Philippines) is a holistic process, which teaches the practitioner how to permanently control the incoming attacking energy through a 100% prepared body structure via an intense physical and mental training. The attacked parts of the body „are being charged“ by the physical contact of the attack and render the energy back to the opponent in its entirety with only minimum action of our self.

There are four basic assumptions, that have to be complied, because they state the respective level of human evolution

1. Each human being knows how to fight without having ever practiced any kind of martial arts / combat sports, because by intuition he has learned how to accelerate objects (which comprises one’s own body) and therefore charging it with energy and simultaneously choosing an intended trajectory for effective impact. Key idea: playing dodgeball but aiming at hurting the other person with the ball.

2. The information processing chain based on visual detection in consecutive order: detection / data processing / analysis and decision making / physical transition is simply too slow - in regards to the time frame during a conflict situation. This is the basis of self-defense concepts deducted from traditional martial arts.

3. The 'selective attention' phenomenon ('tunnel vision‘). This is a physiological fact.

4. Energy as such and the respective volume can visually not be grasped. This is a physiological fact. These four basic assumptions render it impossible to achieve a 100% security for one’s own actions against an attack, that is coming in with full blow and intention, if the basis is visual detection. A logical strategy for being able to apply a 100% secure action for self-protection must be built differently than those self-defense concepts deducted from traditional martial arts, whose basis of action decision making is universally visual detection. 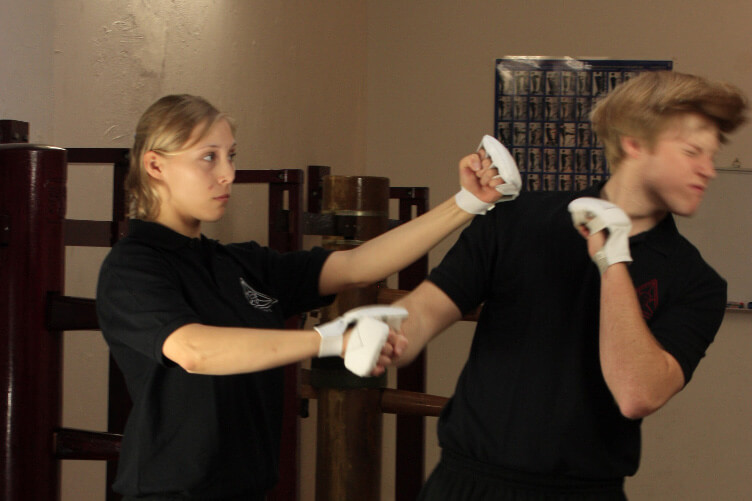 IUEWT Wing Tsun can trained aside without prior knowledge to any non-logical or traditional martial combat sports or martial arts, because of the teaching method ot the IUEWT is based on the independency of logic (of the body)!

Hereby it is important that basic terms of logic and body strategy are to be distinguished against other non-logical or traditional martial arts or sports so that no false assumptions may arise. This is the main objective of a proper introduction into the IUEWT-Wing Tsun. 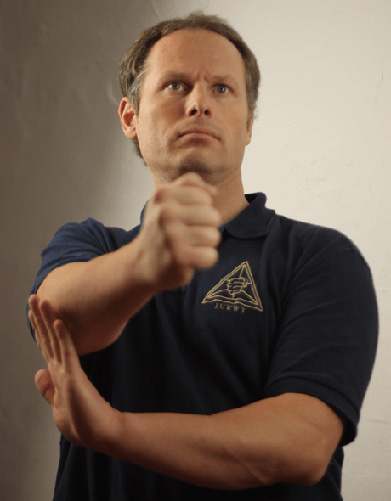 For already experienced practitioners of various combative disciplines IUEWT Wing Tsun offers enough aspects and concrete enhancements for the efficiency improvements of the respective combat style or competition preparation – logic is not bound to any rules, and is thus universally applicable – platform independent! However, logic is broken by every artificially human made system of rules. In how far the practitioner up to which level is willing to apply the logic remains his sole choice.

The logical base of all actions in IUEWT Wing Tsun: the logical relation of risk and security. With it the only reasonable relation in terms of logic is that of 0 % risk and 100 % of security! If this thinking is broken down into all aspects, the concept of the ‚redundancy‘ or multiple security is coming into perspective naturally.

The always recurring fact, that it is often not possible to leave a situation, or that a violant person has already ignored all set up boundaries being built up by techniques of de-escalation, must make aware, that a training for violence prevention should not only be based on techniques of verbal de-escalation – a training ratio should balance 80 percent physical to 20 percent mental. The logical fact is, that the body conducts uncontrollable and unchangeable reflex actions, once we arrive in a stage of panic.

Hence it needs a much greater effort to bring the body towards a controlled behavior into compliance with verbal de-escalation in order to reach multi-level security. Training in verbal and behaviorial techniques for de-escalation are considerably more easy to learn on their own. Hereby to remember: every fight avoided is a fight won – given that the potential violent person makes this happen from his side too!


Yes and no – IUEWT Wing Tsun means innovation of the individual possibilities and abilities through constant work (old Chinese concept of ‚KungFu -‚ hard and long continuous work). Although coming from the past it is more contemporary then ever, because logic does not know any ages! Wing Tsun has, however, a history of approximately 300 years.

The IUEWT Escrima systematic is based on tenet of one of the most well known one for its traditional logic from Hong Kong. The IUEWT has itself adapted the traditional logic in a contemporary fashion by so it has become a generic and universally understandable tenet for everyone, who is willing to devote himself to a journey into himself. By looking only from the functionality perspective the IUEWT has enriched this with teaching approaches from another logical martial art - Escrima (GM Rene Latosa).

The elaboration of the conformance of this approach with the strategic logical functionality of the IUEWT Escrima and the respective transition on the physical level is the unique and exclusive development of the IUEWT - the IUEWT Wing Tsun-Escrima. Our in over 40 years accumulated know-how from him is taught on highest international skill levels. Our over 40 years experience is taught on highest international skill levels.

Join us now for your journey into a new dimension real functionality!